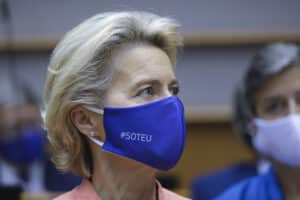 The Brexit negotiations remained stuck after a call between Boris Johnson and Ursula von der Leyen before a decisive week of talks.

The European commission president and the prime minister both highlighted in their post-call statements the contentious issues of EU access to British waters and agreement on future rules to ensure fair competition.

Von der Leyen tweeted that “some progress has been made, but large differences remain” with just over a week remaining before the UK and EU parliaments need to begin ratification of a trade and security deal.

A statement from Downing Street emphasised the need to “redouble efforts” when the two sides, led by the EU’s chief negotiator, Michel Barnier, and his British counterpart, David Frost, re-engage on Monday.

A Downing Street spokesman said after Saturday’s call: “The prime minister set out that, while some progress had been made in recent discussions, significant differences remain in a number of areas, including the so-called level playing field and fish.

“The prime minister and president agreed that their negotiating teams would continue talks in London next week, beginning on Monday, in order to redouble efforts to reach a deal.”

The negotiations are entering a decisive phase. But Barnier privately warned last week that the talks are not on a “trajectory” for a deal, telling MEPs that the coming week offered the last opportunity for common ground to be found.

On fishing, Barnier has told diplomats there is a big gap between the sides on quotas and that “access to the 6-12 mile fishing zone” remains a sticking point for France and Ireland, which point to their fishing fleets operating in those seas for centuries.

One source said the EU was nevertheless seeking to help Johnson to overcome his political problems at home in order to get the deal over the line but that the gaps in terms of quotas remained too big for the EU to be able to start selling the deal to member states.

But in Brussels, the greatest concern is the lack of progress on the issues of standards and domestic subsidies, or state aid.

The EU has proposed high-level principles on state subsidies to which both sides would agree. The UK would also establish an independent competition authority and there would be a dispute settlement mechanism with both sides able to take swift retaliatory action during an arbitration period if there is a clear breach of the rules.

Downing Street has suggested, however, that the threshold for unilateral action needs to be a clear impact on trade from a subsidy rather than a mere risk.

Meanwhile, on the issue of standards, the UK has agreed to non-regression from current environmental, labour and social regulations but there has been a clash over how the two sides will develop their laws over time. “We are nowhere,” said one source.

There are also concerns about progress on customs facilitation to allow goods to be exported and imported with the minimum of checks.

The two sides have clashed on the UK’s insistence that international standards for goods should be mutually recognised as acceptable by either side rather than EU rules.

According to a leaked memo, it is said that Barnier is concerned this issue could “derail” the entire customs declarations system.

Analysis: At pivotal moments of 2020, Trump failed to win over doubters

During the holiday season, majority of Filipinos shopped on social platforms