THE Philippine economy continued to shrink for a third straight quarter, although at a slower pace compared with the second quarter, as lockdown restrictions were further loosened amid the coronavirus disease 2019 (COVID-19) pandemic.

A BusinessWorld poll of 19 economists last week showed a median forecast of a 9.2% decline in the third quarter. 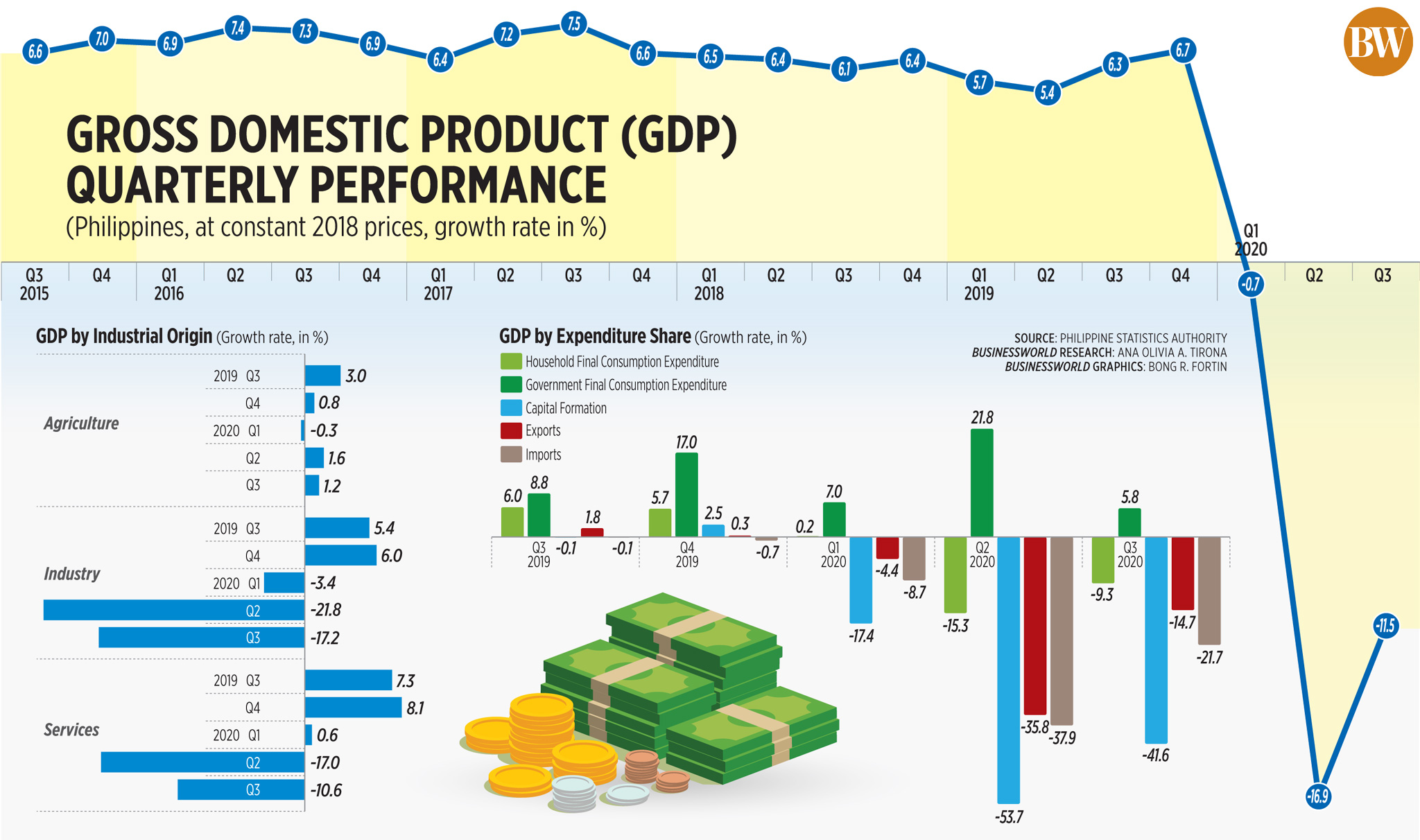 Year to date, the GDP performance stood at -10%. The government expects the economy to contract between 4.5%-6.6% this year.

The government gradually lifted lockdown restrictions starting June, although Metro Manila and nearby areas returned to a strict lockdown for two weeks in August to curb the rise in COVID-19 cases.

The exports of goods and services declined by 14.7% compared with the 1.8% growth last year. However, this was slower than the 35.8% fall in the second quarter. Similarly, imports slipped by 21.7% compared with the declines of 37.9% in the previous quarter and 0.1% in the third quarter of 2019.

Government spending grew at a much slower pace of 5.8% in the third quarter compared with 21.8% in the previous quarter and 8.8% last year.

On the other hand, agriculture posted a 1.2% growth rate, but was slower than the second quarter’s 1.6% and last year’s 3%.

Gross national income — the sum of the nation’s GDP and net income received from overseas — saw a 13% drop in the third quarter compared with a 5.2% growth in 2019’s comparable three months.

MIXED OUTLOOK
The government, however, said the economic contraction has already bottomed out in the second quarter and that the “worst is over.”

“The smaller GDP contraction of 11.5% in the third quarter from a contraction of 16.9% in the second quarter indicates that the Philippine economy is on the mend. The path is clearer to a strong bounce back in 2021,”  Acting Socioeconomic Planning Secretary Karl Kendrick T. Chua was quoted in a statement by the National Economic and Development Authority as saying.

In an e-mail, University of Asia and the Pacific Senior Economist Cid L. Terosa said economic performance in the fourth quarter “will be better” owing to easing lockdown restrictions as well as the onset of the holiday seasons that would reinvigorate production and consumption activities.

“[Fourth-quarter] GDP is expected to display a semblance of normalcy… [with a GDP performance] of at least 2-4%,” he said.

On the other hand, some economists were not so optimistic.

“With unemployment still elevated at 10% and business sentiment negative according to the Bangko Sentral ng Pilipinas (BSP), we do not expect a quick rebound in growth with GDP remaining in negative territory until a base effect-induced bounce in [the second quarter of 2022],” ING Bank N.V. Manila Senior Economist Nicholas Antonio T. Mapa said in a note.

“Household consumption, which delivers the bulk of economic activity, will be handicapped in months ahead given the challenging labor market while bank lending slowed to single-digit growth, signaling a parallel slowdown in investment momentum,” he added.

Mr. Mapa also noted the “persistent threat” of the coronavirus pandemic, citing the sustained and elevated number of daily infections that may increase from eased lockdowns.

In a separate note, HSBC Global Research Economist Noelan C. Arbis said third-quarter GDP performance “did not look that much different from the second-quarter numbers.”

“Private consumption and fixed investment continued to drag down growth, albeit to a lesser extent, while net exports and government spending contributed positively, similar to the previous quarter,” Mr. Arbis said, adding the economic contraction this year is “likely to exceed” expectations of economic managers.

“The main takeaway perhaps is that [the] numbers suggest… the economic contraction this year is likely to exceed the government’s -6% forecast. We expect full-year GDP to decline by 9.6% in 2020,” he said.

“A large driver of the rebound was the easing of strict lockdown restrictions. But with the virus still not under control, a further scaling back of containment measures will take longer, meaning life is unlikely to return to normal anytime soon,” he said.

“What’s more, the economic scars from the downturn, including business insolvencies, weaker household balance sheets and high unemployment, will weigh heavily on demand for many months to come. On the external front, while merchandise exports returned to growth in September, second waves of the virus in the US and Europe have made the outlook more uncertain. The tourism industry is likely to remain on its knees for some time,” he added.

STIMULUS NEEDED
Reacting to the continued contraction in household spending in the third quarter, House Ways and Means Committee Chairman and Albay Rep. Jose Ma. Clemente S. Salceda reiterated his call for another round of direct cash transfers.

“If the disposable income goes down deeply, below expectations, we should be open to a direct, universal cash transfer. There should be some fiscal space left since we outperformed revised revenue targets this year,” Mr. Salceda said in a statement.

Mr. Salceda, who also co-chairs the economic stimulus and recovery cluster of the House Defeat COVID-19 Committee, has stressed the need to expand the third round of the Social Amelioration Program in the 2021 budget “to a more universal level.”

“In 2021, stimulus measures will work because mobility restrictions will be less than that of 2020, so we should not be afraid to spend more. I estimate that we have at least P150 billion more in fiscal space for the 2021 budget…,” he said.

The House of Representatives transmitted to the Senate on Oct. 27 its final version of the 2021 General Appropriations Bill, containing P4.5 trillion worth of spending items for next year’s budget. Senate President Vicente C. Sotto III has said the proposed budget will be signed into law before Christmas barring “unforeseen circumstances.” — Michelle Anne P. Soliman with inputs from Kyle Aristophere T. Atienza

Unemployment rate jumps to three-month high in May