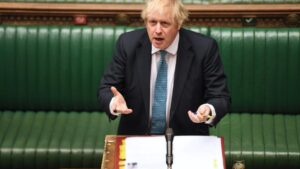 Boris Johnson is heading for a COVID showdown with rebel Tory MPs, despite being assured of victory in a Commons vote after Sir Keir Starmer said Labour will abstain.

Around 50 Conservative MPs are predicted to come out against the government in a vote to approve the tier system of COVID curbs in England, in which 99% of the population face tough restrictions.

But in a dramatic twist on the eve of the Commons clash, the Labour leader announced that for the first time during the pandemic Labour would not support the government in a key vote.

The party will instead abstain, although a handful of left-wing MPs are expected to join rebel Tory MPs in voting against the restrictions, which come into force at midnight.

That means that even if Mr Johnson suffers a big rebellion from his own backbenchers, the so-called “payroll vote” of members of the government, boosted by backbench loyalists, will ensure a comfortable government victory.

But the rebellion will be deeply embarrassing for the prime minister and mean that for the second time – following a rebellion by 34 Tory MPs in the vote on England’s national lockdown on 4 November – he has been rescued from defeat by Labour.

Announcing his decision to order Labour MPs to abstain, Sir Keir said: “Coronavirus remains a serious threat to the public’s health and that’s why Labour accept the need for continued restrictions.

“We will always act in the national interest, so we will not vote against these restrictions in parliament tomorrow.

“However, I remain deeply concerned that Boris Johnson’s government has failed to use this latest lockdown to put a credible health and economic plan in place.

“We still don’t have a functioning testing system, public health messaging is confused, and businesses across the country are crying out for more effective economic support to get them through the winter months.”

Despite the lifeline thrown to the prime minister, Downing Street reacted angrily to Sir Keir’s decision not to order his MPs into the aye lobby to support the government’s measures and accused him of “playing politics”.

“This pandemic is one of the biggest challenges facing the country in decades and Labour have decided to abstain on it,” said a Number 10 spokesperson.

“While Keir Starmer claims he offers new leadership, it’s clear to all that he actually offers no leadership at all.”

Opening the debate, Mr Johnson is expected to announce a £40m handout to pubs hit hardest by the coronavirus restrictions.

In a move demanded by many of the rebel Tory MPs, the compensation will be paid to so-called “wet” pubs and bars which are unable to open and serve “substantial meals” under the new Tier 2 regulations.

Earlier, a 48-page analysis of the impact of the tier system on the nation’s health and economy was dismissed by senior MPs as inadequate and unconvincing.

“Before the current lockdown, incorrect death and hospital capacity modeling was leaked into the public domain to justify it,” he said.

“We have asked repeatedly for the information that vindicates these hospital projections and they have not been forthcoming.”

“On a number of occasions, I’ve requested from the chancellor and Treasury officials that they publish an analysis of the economic impacts of the three tiers,” he said.

“With little over 24 hours until MPs vote on the new tiered system, this rehashed document offers very little further in economic terms other than that which the OBR published last week.”

Later, Labour hit out at a report in The Times that the government has drawn up a secret dossier on the impact of coronavirus on the economy, including a list of “red” areas facing the biggest job cuts.

Shadow Cabinet Office minister Rachel Reeves said the government could no longer keep the risks to jobs and the economy “secret”.

Despite the looming rebellion, Health Secretary Matt Hancock issued an eleventh-hour plea to rebels to back down as he closed a Downing Street news conference on the eve of the vote.

“I would urge all MPs right across the House to vote for the tiered system,” he said, warning it would be the “best way” to avoid a third lockdown.

Marcos stakes his presidency on agriculture