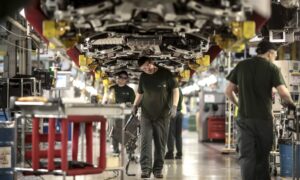 Jaguar Land Rover has shut down production at its Castle Bromwich factory until Christmas because “an issue related to Covid” has prevented the delivery of key materials, in another sign of the strains facing the UK automotive industry.

Production of JLR’s XE and XF cars stopped earlier this week and will not restart for two weeks, in another blow to the UK’s largest carmaker as it struggles with the coronavirus pandemic and Brexit preparations.

The cause was a “supplier issue related to Covid”, a spokeswoman said. JLR declined to identify the supplier in question or which materials were in short supply.

The spokeswoman insisted the shortage was not caused by the congestion at England’s ports, which forced the Japanese carmaker Honda to stop production this week. Honda’s shutdown will continue until Monday at least.

Companies across the UK are struggling with delays to parts and finished products amid delays at the main British container ports, the rush to import products for Christmas, and global issues in the shipping industry. Shipping container prices have surged in recent weeks as pandemic shutdowns have unbalanced production schedules and delivery schedules worldwide.

Some industry figures have linked the ports disruption to pulled-forward demand as companies stockpile to prepare for a possible no-deal Brexit on 1 January. The automotive industry, including JLR, has been outspoken in its opposition to the tariffs and regulatory barriers that would immediately hit them if no deal is reached.

For JLR, owned by the Indian conglomerate Tata Group, the latest supply issues come as yet another blow as it tries to recover from the pandemic, which forced it and every other European carmaker to shut down their factories in April and May.

JLR’s recovery has been slower than some of its rivals. JLR was in October still disproportionately reliant on the government’s job retention scheme, which will support the wages of furloughed workers until at least the end of March.

The Guardian previously revealed that JLR was only planning to use a small proportion of its capacity at Castle Bromwich, with about 3,500 each of the XE and XF due to be produced until the end of March, according to plans that did not take into account the latest shortages. The West Midlands factory employs about 2,500 workers.

A spokeswoman for JLR said: “As part of its usual business practice, Jaguar Land Rover regularly adjusts its production schedules.

“Whilst we have strong customer demand, we have made changes to our production schedule in Castle Bromwich due to temporary supplier constraints. We are working with the supplier to resolve this and minimise impact on customer orders.”

However, a source with knowledge of the issue suggested that the ports disruption may have been a contributing factor.

What To Know Before Becoming A Graphic Designer in The UK?

Are we a nation of tax procrastinators?