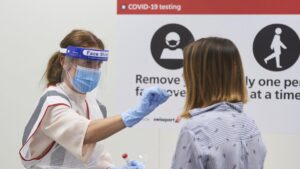 The CBI is talking to ministers about using the “test to release” scheme currently in place at airports to allow staff to work more closely together particularly in settings where social distancing is difficult to manage.

The scheme was designed to allow travellers to cut their period of self-isolation from ten days to five if their Covid test result was negative. It was part of a support package for the travel industry aimed at giving people the confidence to book international trips. However, the discovery of a new strain of the virus prompted more than 40 countries to ban visitors from Britain.

A spokesman confirmed the CBI was considering how rapid testing could help sectors including food production, manufacturing and distribution.

Meat processing plants have been seen as Covid hotspots after a dozen outbreaks at factories. While it is difficult to maintain social distancing in abattoirs and on production lines it is also thought that there is a greater risk of infection because the factories tend to be in rural areas, with workers sharing houses and cars.

Retailers including Asos and Next have said that productivity in their warehouses has been limited by social distancing requirements. As a result, they have had to extend delivery times because it takes longer to pick and pack orders.

Ocado, the online grocer, has tested staff entering its robotic warehouse after buying 100,000 kits from China. The John Lewis Partnership introduced testing this month for 1,000 staff at its distribution centre and 40 stores three times a week.

The government is considering a range of incentives and subsidies to help with the costs of testing, according to The Mail on Sunday which first reported the CBI’s discussion of more testing. It is thought frequent testing could help get businesses back on their feet while waiting for vaccinations.

A pilot of about 30 firms, including John Lewis, is already in operation while a number of private businesses offering rapid tests have sprung up.

Companies have been urged to consider whether they would want to make testing mandatory and how frequently they would test their employees.

Why family must come first in business

6 key themes all business leaders need to address in 2022

Yields on BSP’s term deposits drop ahead of policy meeting

Podcast Network Asia receives $750,000 in new round of seed funding

India’s economy slows in March quarter, with worse to come