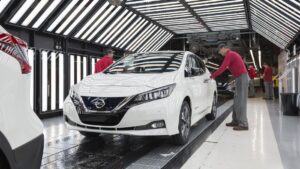 Nissan is to expand its battery production plant in Sunderland to satisfy demand for a new longer-range version of its Nissan Leaf electric car.

The decision comes after Nissan disclosed the extent to which the pandemic had hurt its Sunderland plant, the largest car factory in Britain.

The Japanese carmaker believes that its new long-range Leaf, with a 62-kilowatt-hour battery and 239 miles of range — compared with 168 miles on its standard 40KWH Leaf — will help to convert more motorists.

Although the Leaf is more affordable than most models, it slipped to fifth in the UK plug-in sales rankings last year. Only one in ten cars, or 24,000, coming off the Sunderland line was a Leaf last year.

Outside British domestic volumes, Nissan sells its Sunderland production to Europe. After the UK’s departure from the European Union, while the Qashqai, Juke and standard Leaf models built in Sunderland qualify to be sold in the EU under localised sourcing — or rules of origin — regulations, the long-range Leaf does not as its more powerful battery has to be brought in from Japan.

Nissan has said that it and Envision, the Chinese company that is its battery partner in Sunderland, will make the more powerful batteries in the northeast to ensure that the long-range Leaf can be sold in the EU.

The news is good for a British carmaking sector hit by factory closures and tens of thousands of job losses, as well as fears that it may be left behind in the electric car revolution.

Andy Palmer, a former senior Nissan executive, has issued a chilling alert over the future of the UK electric car industry. Now involved in a small battery producer called Ino Bat, Mr Palmer is calling on the government to launch a “gigafactory” taskforce, warning: “We either build battery factories or risk losing the entire UK automotive industry.”

10,000 pubs and restaurants called time in the year of coronavirus

Philippines will have enough vaccines for adults, palace says