Pubs and restaurants could stay closed until May 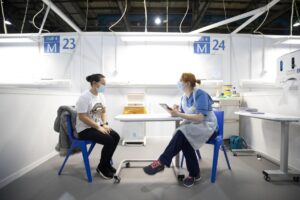 Hospital pressure will not ease enough to allow the reopening of pubs and restaurants until May if this year follows the same trajectory as last spring, new analysis suggests.

If bed occupancy by Covid-19 patients declines at the same rate as last year, it will take until mid-February to reach the peak of last spring and will not fall to the level at which primary schools reopened until early April.

While the speed of decline is not yet clear, experts said that the projections illustrated how long it would take to ease lockdown. They suggested that Boris Johnson’s hope of being back to normal by Easter was unlikely.

Hospital admissions are now clearly falling, with the number of new Covid-19 patients at its lowest this year. Official data shows infection rates for all ages falling after more than a month of lockdown restrictions.

There were 2,648 hospital admissions of people with Covid-19 on Monday, according to figures from NHS England. This was down 29 per cent on a week earlier and the lowest figure since December 31. New admissions, however, continue to rise across the Midlands and Yorkshire and Humber. Scores of hospital trusts have reached full critical care capacity.

The number of Covid-19 patients receiving treatment in hospitals has fallen week-on-week in all regions. London has had the biggest drop, with 6,272 patients at 8am on Wednesday, down 17 per cent on the previous week.

The capital continues to have the highest rate of new cases of any region, however, at 435 per 100,000 people in the seven days to January 24, down from 658.7 the previous week.

Chris Whitty, the chief medical officer for England, has said that the second wave has peaked, with a high of 39,192 patients being treated on January 18, almost twice as many as the high point of the wave last spring.

Ministers have said that pressure on the NHS will be a key measure in a “roadmap” out of lockdown due to be published next month, along with deaths and the progress of the vaccination programme. If weekly falls in Covid-19 occupancy mirror weekly changes from last April, the number being treated for the disease across the UK will dip below last April’s peak of 21,684 on February 16.

Schools began opening last year from June 1, when there were 7,244 Covid-19 patients in hospital, a level that will be reached on April 3 in this scenario. When the hospitality industry was allowed to resume on July 4 there were 2,800 Covid-19 patients, which on last year’s trajectory would not be reached until May 5. Government sources stressed that it was too early to know what target dates would feature in the roadmap, saying it was “speculative” to suggest shops might open in April followed by pubs in May. Scientific advisers have previously said that it was unlikely to be safe to open pubs until May.

Paul Hunter, of the University of East Anglia, said that it was not yet clear how the decline this year in hospital pressure would compare with last year. He added: “I would broadly agree with this timeline. But there are a lot of variables that could push this either way.”

Professor Hunter said that “vaccination could speed it up”. He added: “Although we should start seeing effects in a couple of weeks, it won’t make much difference at first and we won’t see the full effect for some months. It doesn’t seem likely that we will back to normal by Easter.”

Yvonne Doyle, medical director at Public Health England, said: “There are some initial signs that the current measures are bringing infection rates down but there is still a long way to go.”

Read more:
Pubs and restaurants could stay closed until May

Electronic invoice and receipts: A boon or bane for taxpayers?