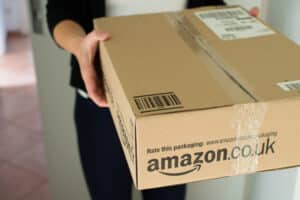 Britain’s online shopping habit has hit a stumbling block. A boom in home deliveries has sparked a national cardboard shortage, delaying deliveries of everything from bicycles to wine.

Wine deliveries have been particularly affected after a surge in demand due to the closure of pubs and restaurants. The Oxford and Cambridge Club, a private members’ club in London, said it could not deliver wine on time because of an “unexpected” shortage of cardboard. Wanderlust Wine in London had to buy unbranded boxes “to get us through”.

Joelle Nebbe-Mornod, owner of Alpine Wines, in Idle, West Yorkshire, said: “My supplier told me they have had a lot of big guys order more than normal, so that’s cascading down. It’s big e-commerce retailers, probably all panic buying. The cardboard that used to take us two weeks to receive is taking four or five and we are also using a back-up supplier.”

A director of one cardboard supplier, which produces everything from bike to wine boxes, said: “We have heard from dozens and dozens of companies, many of whom have been left high and dry with supply prioritised to large volume users.”

Amazon said it was not experiencing shortages. “We work with suppliers throughout the year to forecast and manage our packaging needs.”

Supermarkets have not been immune. A rise in egg sales during lockdown has led to a shortage of cardboard pulp for the boxes. Chains including Tesco, Sainsbury’s, Asda and the Co-op have temporarily replaced some cardboard packaging with plastic boxes.

The Confederation of Paper Industries (CPI), which represents manufacturers, said demand for cardboard boxes from online retailers was five years ahead of where it had expected to be before the pandemic. It said mills were making “fast-moving” investments in new machinery to try to keep up with demand.

Andy Barnetson, director of packaging affairs at the CPI, said Britons were excellent at recycling cardboard with about 80 per cent remade: the rest was often too contaminated with food and plastics.

DS Smith, the UK’s biggest cardboard box maker, said it took two weeks longer for a box to be recycled after being delivered to a home, rather than a shop or business, because it was in wheelie bins awaiting collection.

Simon Ellin, chief executive of the Recycling Association, said: “Home delivery is sucking the cardboard from the system because there is such phenomenal demand. Products are flying through the post, the ‘Amazon effect’ as I call it, and where 10 toys would be packed into one box and sent to a shop, they are now individually packaged and sent to people’s homes. We need to be good recyclers and get it all back in our recycling bin.”

Tourism recovery in Asia-Pacific seen lagging other regions in 2022

Peso may strengthen further vs dollar