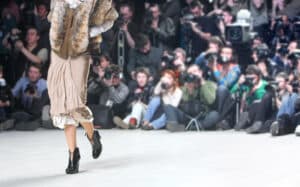 The UK’s £35bn fashion and textile industry is facing “decimation” as a result of red tape and travel restrictions thrown up by the new post-Brexit trade agreement with the EU, Boris Johnson has been warned.

In an open letter to the UK’s prime minister leading fashion industry and chief executives and icons, including models Twiggy and Yasmin Le Bon, said that Brexit was strangling the complex international supply chains and relationships that underpinned their industry.

“The deal done with the EU has [left] a gaping hole where promised free movement for goods and services for all creatives, including the fashion and textiles sector, should be,” they wrote in the letter co-ordinated by the Fashion Roundtable, an industry forum.

Ms Le Bon said the ability to travel freely in the EU for work purposes was “crucial” to an industry where models could be assigned to a shoot with just a few hours notice.

“The wealth of these creative industries is in our ability to move and change quickly. For once we need to be listened to and for the government to work with us before it is too late.”

The concerns echo those raised recently by the music industry about the need for work permits for each EU member state and paperwork for moving products and equipment, and they called for urgent action from the government.

The industry, which employs nearly 900,000 people according to research by Oxford Economics, warned last summer that the Covid-19 pandemic had placed 250,000 jobs at risk.

Many of the 52,000 smaller companies that make up the backbone of the sector could not afford the professional help needed to navigate the new controls, the letter added, with customers on both sides of the Channel rejecting purchases because of unforeseen VAT and tariff charges.

Katharine Hamnett, the fashion designer best known for political T-shirts and championing ethical business practices, said: “We need a radical overhaul of customs arrangements including VAT on all goods shipped into the EU by the end of February, or British brands will die.”

Helen Brocklebank, the chief executive of Walpole, the luxury sector group whose members include Alexander McQueen and Burberry, said the government needed to simplify the post-Brexit trading regime and boost the retail tourist trade.

“With 42 per cent of all British luxury export sales coming from the EU, the costs and administrative burdens of trading in continental Europe mean many of our members — not least the SMEs — have concluded they simply can’t afford to continue selling to those countries,” she said.

Isabel Ettedgui, the chief executive of Connolly, the Savile Row fashion brand that sells Scottish cashmere and manufactures leather goods in Spain, said the financial ramifications of Brexit could be existential. “The result could be the possible closure of a 185-year-old company that holds the Royal Warrant,” she said.

Other signatories included Nick Knight, the fashion photographer; Jefferson Hack of Dazed Media Group; John Horner, the chief executive of the Models 1 agency and head of the British Fashion Models Association; Sam McKnight the hair stylist who worked with Diana, Princess of Wales; the designer Roksanda Ilinčić, the London-based Serbian designer whose dresses are worn by the Duchess of Cambridge and Michelle Obama; Laura Bailey, the model and Vogue contributing editor and Andrea Thompson, the editor-in-chief of Marie Claire magazine.

The more than 400 signatories demanded “urgent action” from the government to protect an industry that is highly fragmented but is estimated to be worth 1.6 per cent of UK gross domestic product, according to research by Oxford Economics for the British Fashion Council last year. By contrast the German industry is worth 0.8 per cent of GDP.

Among the Fashion Roundtable demands is that the government immediately adds garment workers to the list of “shortage occupations” for UK visas to help fill thousands of vacancies in UK clothing factories. It also calls for tax breaks to encourage sustainable practices and negotiations for paperwork-free travel for British creatives and their equipment in the EU.

The group also renewed calls on the government to rescind its decision to scrap the Retail Export Scheme, which had allowed international visitors to claim back 20 per cent of VAT on their purchases, but was ended on January 1.

The Cabinet Office said it was working closely with businesses in the fashion industry to adjust to the new trading environment and was aware that some businesses were facing challenges.

“We are operating export helplines, running webinars with policy experts and offering businesses support via our network of 300 international trade advisers,” a spokesperson said. “This is on top of the millions we have invested to expand the customs intermediaries sector.”