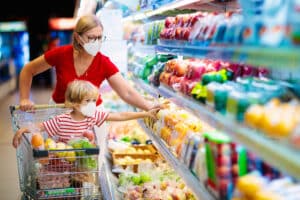 A surge in sales of child-friendly lunch ingredients such as fresh pasta, peanut butter and chocolate spread underpinned £1bn in extra spending on food and drink in supermarkets in the four weeks to 24 January compared with last year.

Healthy eating efforts helped boost sales of vegan-specific foods by nearly a quarter and no-alcohol beer by 12% in the month. But alcohol sales surged by an even stronger 29%, or £234m, as the closure of pubs and clubs led to increased drinking at home.

Post-Christmas lockdowns also prompted a resurgence in online grocery shopping, with older shoppers particularly keen to secure deliveries. Online sales accounted for 14% of total grocery takings, up from just under 13% reported in December, amid fears of catching more contagious forms of the virus that have emerged.

Fraser McKevitt, the head of retail at Kantar, said: “Retired households have boosted their online spend by a staggering 229% compared with January 2020. Older people are clearly getting more comfortable and proficient at ordering online and they now make up 28% of the 6.4 million who used online services in Great Britain this month [January].”

The Covid-19 pandemic has led to a rapid change in the way we feed ourselves, driving massive growth for supermarkets and convenience stores as home cooking has replaced dining out and lunch in a school or workplace canteen.

Total grocery sales rose by 12.2% year-on-year during the 12 weeks to 24 January 2021, a step up from the 11.4% reported a month ago. Independent convenience stores saw the strongest growth among retailers with physical stores, with sales up 20.9%, followed by Iceland, where sales rose nearly 22%. Morrisons was the fastest growing of the four biggest supermarket chains with sales up 14.3%, while the online specialist Ocado’s sales rose by almost 37%.

McKevitt expects to see the pace of growth fall off as we reach the anniversary of the first national lockdown in March.

“Sales will then be measured against the high volumes recorded in spring and summer 2020. With the vaccine rollout under way, there’s also hope that the hospitality sector will reopen, meaning demand for take-home groceries is likely to subside,” he said.

Despite much talk of difficulties in importing food from the EU following the end of the Brexit transition period last month, McKevitt said there was so far little sign of an impact on consumers with “steady” food inflation of 1.3% in January.

Being self-employed blamed for one in six mortgage rejections