Gin boom shows no signs of sloeing down 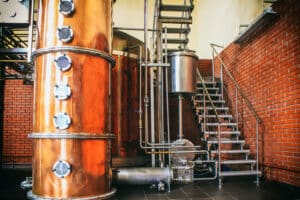 A record 124 distilleries were created in Britain last year as demand for gin, rum and whisky continued to grow.

Despite predictions that the gin craze of recent years would slow down, figures from HM Revenue & Customs show that the number of distilleries rose 28 per cent during 2020. It was the first time that more than 100 had been registered in a 12-month period.

The number of distilleries in England has almost tripled since 2016, which was the same year that English distilleries outnumbered Scottish for the first time, thanks to the gin boom. There are now 311 in England and 214 in Scotland.

A spokeswoman for the Wine and Spirit Trade Association said that the continued demand for craft gin and its quick production turnaround times made it an attractive venture for distillers who did not want to wait for whisky and rum to mature.

“HMRC doesn’t give a breakdown of what each distillery is making but you can safely assume that the majority are making gin,” the spokeswoman said. “That’s what tends to bring in the money, then these distilleries start to invest in other spirits which take longer to make like whisky.”

Darren and Sam Graves opened the Maidstone Distillery in Kent last July. During the national lockdown, the couple used the site to make hand sanitiser for schools, Network Rail, care homes, ambulances and charities. The town previously had a successful distilling industry.

“Almost two years ago we decided we would daydream no longer and began our plans for building a distillery,” the couple told The Spirits Business last year.

“We were astounded in our research to come across a document from the 1950s lamenting a forgotten distilling industry right in the centre of our county town. We felt compelled to resurrect this legacy and create something the town could be proud of once again.”

Miles Beale, chief executive of the Wine and Spirit Trade Association, called on Rishi Sunak, the chancellor, to cut duty on spirits and extend the VAT reduction in hospitality venues until next March.

“With such a difficult 2020 behind us and a daunting challenge to recover in 2021, our distillers need the support of the chancellor at the upcoming budget [next month],” Beale added.

Read more:
Gin boom shows no signs of sloeing down

Peso to climb further vs dollar ahead of remittances, BoP data

After losing Luhansk, Ukraine forces regather for defence of Donetsk

Motorcycle delivery riders, more essential than ever, have seen job security elude them